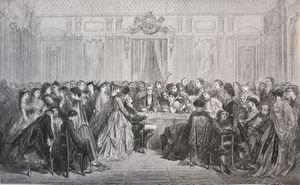 The Baden-Baden Casino in the Kurhaus is one of the oldest casinos in Europe. In its pompous gambling halls it is possible to play roulette, blackjack and poker and slot machine games. The slot machine games are spatially separated from the classic games.

Before entering the casino there is the possibility in the Kurhaus foyer to leave jackets and coats in the cloakroom. At the entrance of the casino, the ticket is purchased. Without valid identity card or passport admission is not possible. Guests must be at least 21 years old. Furthermore, attention is paid to "appropriate clothing". Men need to wear tie and jacket.[1] At the counter behind the entrance area it is possible to change money into chips.

For the slot games there is not such a strict regulation regarding clothing. Access is possible with "dapper casual clothing".

Gambling has a long tradition in Baden-Baden. It was first operated in the guesthouses. In 1748 there was probably a margravial edict that allows officially the gambling in the guesthouses.[2] When the number of visitors and gamblers increased substantially in the 19th century, the proper game operation in the hotels couldn't be assured any longer. Therefore, gambling was monopolized in two establishments: The Konversationshaus at the market place and the Promenadehaus, the predecessor of the Kurhaus.

After the construction of today's Kurhaus in 1824 by Friedrich Weinbrenner, gambling was only allowed there and the tenant Antoine Chabert was the city's only casino tenant. At first only a small room behind the big hall, which is today known as the Weinbrennersaal, was used for gambling. Later the gambling took place in the big hall. Antoine Chabert and his son created an important foundation for the later success of the casino. For example, they hired famous opera ensembles and artists and arranged thereby a cultural program.

After the casino ban in France in 1838 the former tenant of all ten gambling halls in Paris, Jacques Bénazet, came to Baden-Baden and became the new casino tenant. He guided the casino to great success and became the most influential man in the city. With its investments in the cultural entertainment program, in international marketing activities and the city's infrastructure Baden-Baden became a sophisticated spa.

After the death of Jacques Bénazets in 1848 his son Edouard Bénazet took over the casino and continued his work with even greater success. Under Edouard Bénazet the rooms of the theater in the north wing were transformed into today's gaming halls in the years 1853 and 1854. Charles Séchan was responsible for the pompous design in the style of French royal palaces. A new theater building was set up in the neighborhood short time afterwards.

When Edouard Bénazet died in 1867, his nephew Emile Dupressoir took over the casino, and operated it until the gambling was banned in the newly founded German Empire. On 31 October 1872, the Baden-Baden gambling era ended in the last game with "red 9".[3]

After a 60 years break gambling was resumed in 1933. Towards the end of the Second World War the casino had to close again in 1944.

Retrieved from "http://en.stadtwiki-baden-baden.de/w/index.php?title=Casino&oldid=285"
Was this page helpful?
X
Restliche Zeichen: 1000