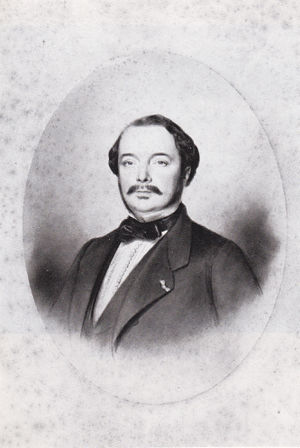 Oscar Edouard Bénazet (* May 30th, 1801 in Bordeaux; † December 2nd, 1867 in Nizza) was a French businessman and long time operator of the Baden-Baden gambling casino. After the death of his father Jacques Bénazet in 1848 he continued his business with even more success. Honoring his great achievments he became honoray citizen of Baden-Baden on September 1st, 1851.

Edouard Bénazet was born in 1801 in Bordeaux. He supported his father Jacques Bénazet in Baden-Baden and after his father's death he continued to manage the gambling casino and related businesses. Like his father Edouard Bénazet invested a lot in extensive promotion. For example he supported the seasonal newspapers "Mercure de Bade" and "Ilustration de Bade". In addition he sponsored the establishment of an orchestra in 1854. In the Kurhaus he ordered and financed the transformation of some rooms into pompous gambling halls in 1855 and later financed the theater building that was opened in 1862. Already in 1858 he ordered a horse racing course in Iffezheim. By organizing horse races there, he established a new attraction for the visitors of Baden-Baden. Even more building projects were financed or subsidized by the gambling casino, for example the construction of the Protestant Church. In addition Bénazet sponsored a manifold entertainment program. He operated the orchestra with 51 musicians, financed guest concerts, operas, plays in the theater, huntings, illuminations and fireworks. He operated the reading hall in the Kurhaus and paid artists, who drawed pictures of Baden-Baden. Edouard Bénazet died childless in 1867. His nephew Emile Dupressoir continued the gambling casino after him.

Retrieved from "http://en.stadtwiki-baden-baden.de/w/index.php?title=Edouard_Bénazet&oldid=249"
Was this page helpful?
X
Restliche Zeichen: 1000