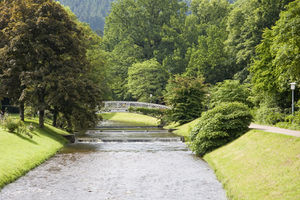 The bridge Gönnerbrücke crosses the Oos at the garden Gönneranlage.

The Oos (sometimes called Oosbach) is a river that is traversing Baden-Baden from southeast to northwest. After 25 km it flows near Rastatt into the Murg.

The headwaters of the Oos are located just below the restaurant Scherrhof and thus almost at a height of 700 m above sea level. Here, the brooks Scherrbach, Kälberwasser and some other partially unnamed streams unite to the river Oos. The Oos passes Gaisbach and the Forellenhof and then flows at first through the districts of Oberbeuern and Lichtental. At the square Brahmsplatz the stream Grobbach flows into the river Oos. At the Monastery Lichtenthal the Oos takes a right angle before it then flows in the Lichtentaler Allee and the Kaiserallee below many artfully crafted bridges. At the height of the Festspielhaus it disappears into the underground in order to resurface at the crossroads Lange Straße / Eisenbahnstraße. After it passed the Aumattstadion the Oos flows around the settlement Ooswinkel, which received its name (that translates to Oos angle) due to the course of the Oos there. Parallel to the Schwarzwaldstraße the Oos flows into the district Oos, where it is split into two arms. The arm that is heading west ends in the Sandbach, that comes from Bühl, which in turn flows south of Iffezheim into the Rhine. The arm heading in northern direction passes the district Sandweier at the east and ends in the Murg, which also flows into the Rhine.

In 1245 the course of the Oos was changed for political reasons. The Strasbourg bishop refused to found a monastery at today's Klosterplatz. So the Oos was redirected in a way that the monastery was on the right bank, and thus on the territory of the Diocese of Speyer. With the approval of Speyer, the Monastery Lichtenthal could be founded.

A flood of the Oos caused severe destruction in October 1824. Afterwards the river was regulated according to plans by Johann Gottfried Tulla. The sweeping meanders, that crisscrossed the Oos valley were removed, and the river was rectified.

After heavy rainfall on 28 October 1998 there was severe flooding throughout the city of Baden-Baden. As of 0:25 on 29 October state of emergency was declared. In Geroldsau the Grobbach washed away a 50 m long piece of the road Geroldsauerstraße. The Oos turned into a raging torrent. Basements and underground parkings were flooded. Houses were eroded and were under danger of collapse.[1]